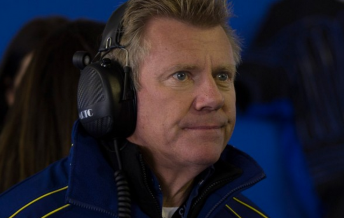 Schwerkolt has signed a two-year agreement to run as a satellite operation under the Walkinshaw Racing banner, replacing the departed James Rosenberg entry.

The owner of leading Melbourne-based forklift firm, the Waverley Forklift Group, says the new home also spells the best chance for Erebus refugee Lee Holdsworth to make an impact on the championship.

“It’s a tough gig. The toughest in the world. You put your whole heart and soul into the sport. It’s just 24/7.

“Lee is really pumped and it’s his big chance to make it really work.”

Schwerkolt had another year to run with his #18 REC (Racing Entitlements Contract) at the FPR stable however admitted that a sponsor clash had ultimately left him no choice but to seek partnership with another team.

Another, yet-to-be-formally announced, sponsor was locked in late last year after major backer Jeld-Wen elected not to continue as CSR’s primary backer.

“I spoke to Rod (Nash) and Tim (Edwards) at the ride day at Phillip Island in November,” explained Schwerkolt.

“I told them we have a team of people trying to replace Jeld-Wen but it’s really tough.

“Then I said, ‘I’ve come up with a sponsor but there’s a bit of a conflict so what can we do?’.

“I then had to look at all the other options and straight out of the blue I heard there was a spot going at Walkinshaw Racing.

“Lee Holdsworth and I were all ready and set to go with FPR and we were excited about that.

“That’s where we thought we were going but partners/sponsors are hard to get and when this conflicting one came on board it made things a little bit difficult.

“I will miss my boys at FPR, but am definitely looking forward to forging a great relationship with the team at Walkinshaw.”

Schwerkolt said his deal with Walkinshaw is similar to the one held with FPR however he will only handle the commercial side of the #18 Holden.

“It’s a very similar deal to the one at FPR. It’s two years,” he said.

“At Walkinshaw it is a true four car operation and I will have very little input into the car.

“I will let Adrian (Burgess) run the whole thing and I’ll just run the commercial side.”

Schwerkolt is upbeat about finding the key to unlocking competitive results at the Clayton operation.

“I’m confident this is the right package for Lee and it’s the right move for me. We’ll give it a red hot go this season.”

Schwerkolt is expected the unveil the #18 Holden and its sponsors on the eve of next weekend’s Sydney Motorsport Park test.