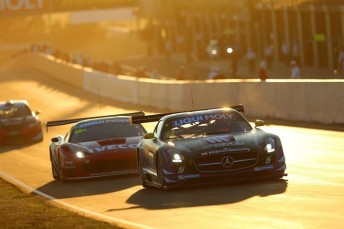 The Bathurst 12 Hour will be split across Seven and 7mate

Bathurst 12 Hour organisers have confirmed details of the television broadcast and online streaming service for the February 6-8 event.

Seven’s live coverage will commence on 7mate at 5:30am, 20 minutes prior to the race start.

The broadcast will then switch to Seven’s main channel from 2pm, continuing through until the finish.

The coverage will be hosted by Seven’s Mark Beretta, who will also perform pit reporter duties during the race.

Live streaming via the race’s own website will this year be split into a local feed, mirroring the Seven coverage, and a separate international feed.

Live streaming will also be available on Saturday, with commentary-only broadcast through Radio Le Mans on Friday.

“Nothing compares to hearing the roar of vehicles trackside at Bathurst first-hand, but motorsport fans across Australia and the world can also rejoice with the unprecedented broadcast coverage of the 2015 Liqui-Moly Bathurst 12 Hour making it easy for everyone to enjoy the race,” he said.

“This event continues to draw thousands of visitors to Bathurst each year, and also showcases this wonderful region of NSW and the world-class Mount Panorama Circuit to spectators in Australia and internationally through the television and online broadcasts.”

Last year saw the final three hours of the race broadcast on SBS, marking the first live free-to-air coverage for the event since it returned in 2007.