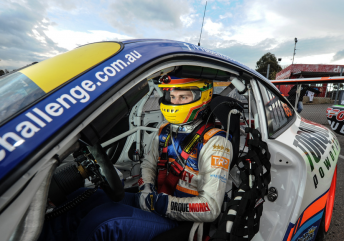 Fraser Ross will move up to the Carrera Cup

Ross spent three years in the GT3 Cup Challenge and says he’s looking forward to a season of learning against the established Carrera Cup stars.

“This is truly a dream come true; winning the GT3 Cup Challenge title was unexpected and I certainly never thought I’d follow it up with joining Carrera Cup this season,” said Ross.

“There was some tough competition in GT3 Cup Challenge and winning the title was a struggle, though I got there in the end.

“This season will bring whole new challenges and will be the toughest year yet of my racing career.

“I’m not expecting to win, or be in the top five, but my aim is to build as a driver and move through the field as the season progresses. I can’t wait.”

Muscat is also moving into the one-make category this year after a victorious season in the Australian GT Championship aboard an Erebus Mercedes.

“To have three GT3 Cup Challenge champions in the 2015 Carrera Cup field and numerous more with GT3 Cup Challenge experience truly demonstrates its importance as a feeder series and a great way to hone your craft in a Porsche,” said Porsche Cars Australia Motorsport Manager Kurt Sakzewski.

“We wish Fraser all the best for the season ahead and hope he paves the way for future GT3 Cup Challenge champions to move up to Carrera Cup competition.”