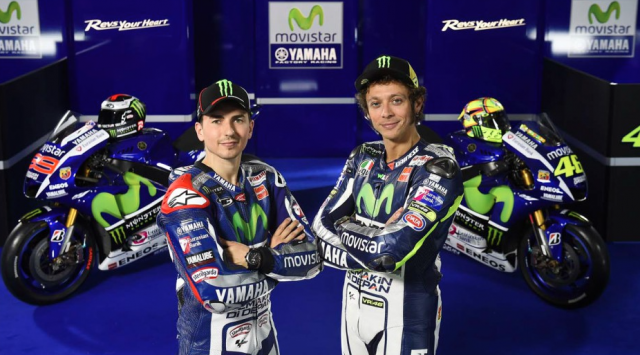 Yamaha has taken the covers off its YZR-M1 machine which will contest the new MotoGP season.

The Japanese manufacturer unveiled its 2015 title challenger for multiple world champions Jorge Lorenzo and Valentino Rossi at a media event in Madrid.

Spanish telecommunications giant Movistar continues to feature heavily in the livery as the company enters into its second of a five year title sponsor arrangement with the team.

For the previous two seasons Honda has dominated the category with Marc Marquez surging his way to back-to-back championships.

Managing Director Lin Jarvis is confident the entire team has all the tools at its disposal to challenge for the championship this season.

“From our side I can assure our riders that Yamaha Motor and everybody in the Movistar Yamaha MotoGP team is committed and focused to provide them all the support they will need to achieve their and our mutual goals,” said Jarvis.

“I am as excited to start the new season and together we are ready to challenge for victory 2015.”

The team will now head Malaysia’s Sepang circuit for next week’s three-day test beginning on February 4.