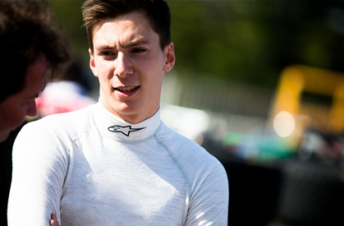 British star Alex Lynn has been vaulted into the Williams Martini Racing F1 squad as a development driver for the 2015 season.

Lynn will focus on using the Grove squad’s simulators as part of the development of the Mercedes-powered FW37 and assist engineers with the set-up of the cars for Valtteri Bottas and Felipe Massa F1 races.

The 21-year-old will also have some seat time in the FW37 one of the test days at Barcelona after the Spanish GP in May.

Lynn was a tearaway winner of the GP3 Series title last season which reaffirmed his enormous talent after coming through and winning the Formula Renault series in the UK in 2011 and starring in New Zealand’s Toyota Racing Series.

He also moved through British F3 and finished third in the highly competitive European F3 Championship and claimed the coveted Macau GP in 2013.

Lynn will dovetail his Williams development duties with the GP2 Series where he will drive for DAMS.

“Williams has a strong track record in bringing young talent through the ranks and our Development Driver position is designed to fully immerse new recruits into the inner workings of a Formula One team,” deputy team principal and commercial director Claire Williams said.

Lynn is joining the Williams operation as the squad continues to emerge as a competitive force after its longest dry spell since the outfit was formed in the 1970’s.

“I am extremely excited to be joining Williams, a team with such incredible history and amazing potential,” Lynn said.