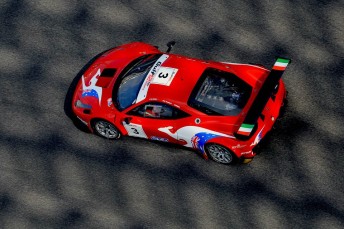 AF Corse will bring two cars to Bathurst this year

The Bathurst 12 Hour field is edging ever closer to completion, with Ferrari squad AF Corse firming its line-up for the February 6-8 event.

The Italian outfit is bringing two Ferrari 458 GT3s to this year’s event after a qualifying crash ended its single-car effort last year.

Last year’s drivers Steven Wyatt, Michele Rugolo and Marco Cioci will all return, but are slated to be split across the two cars.

Australian Wyatt and Italian Rugolo, who teamed to win last December’s Gulf 12 Hours in Abu Dhabi, will share the #77 entry with a third, yet-to-be-confirmed driver.

Cioci will meanwhile be joined by fellow Italian Piergiuseppe Perazzini and Briton Aaron Scott in the other car, which will wear the #3.

The 59-year-old Perazzini and 35-year-old are both Bathurst rookies but have previous experience with AF Corse.

Perazzini was famously involved in Anthony Davidson’s back-breaking crash at Le Mans in 2012, colliding with the Toyota LMP1 on the Mulsane.

The AF Corse Ferraris will be joined by five other 458s at Bathurst, fielded by Australian squads Maranello Motorsport, Trofeo Motorsport and Vicious Rumour Racing, as well as Malaysia’s Clearwater Racing and New Zealand’s Trass Motorsport.