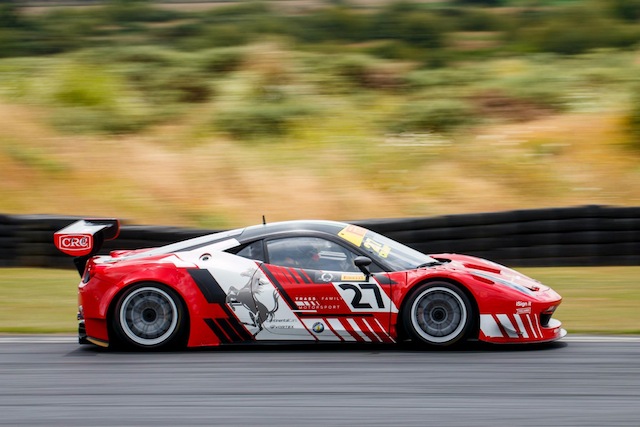 The Trass Family Motorsport team will debut its new Ferrari 458 Italia GT3 in the GT Championship after only its second outing for the Kiwi operation in the Liqui Moly Bathurst 12 Hour from February 6-8.

Lester, 25, is a third generation racer who brings speed and experience from two seasons of GT3 racing in the Super Taikyu Series in Asia, while Kelly is the current NZ Endurance champion.

“PK [Kelly] and I go way back to my first Porsche season in 2006 and he’s always had a reputation for his consistency, reliability and speed,” Lester said.

“In my opinion he’s the top ‘gentleman’ racer in NZ and he’s only gotten better with coaching from Bairdo (Craig Baird) in recent seasons.”

Kelly is no stranger to Australian racing and circuits after having undertaken several seasons in the one-make Porsche Carrera Cup series.

“After racing in Australia in the Porsche Carrera Cup for three seasons I am really excited to take on the Australian GT series with TFM,” Kelly said.

“I recently drove my first GT3 car at the Highlands 101 and it was staggeringly quick.”

The team will go into the six-round Australian GT Championship helped by a partnership with the experienced Maranello Motorsport operation.

The opening round of the Championship is scheduled for the Clipsal 500 in Adelaide from February 26-March 1.