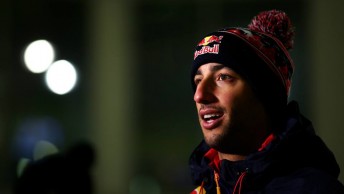 Daniel Ricciardo will have his chance to tackle Lewis Hamilton in equal machinery when he makes an appearance on Top Gear next month.

The BBC has confirmed that Ricciardo will appear on the show’s ‘star in a reasonably priced car’ segment, where celebrities tackle the Top Gear test track in a production car.

Hamilton is the current lap record holder in the Suzuki Liana that is given to each of the Formula 1 stars, setting his time two years ago.

Other grand prix drivers to have taken the challenge include current drivers Sebastian Vettel, Kimi Raikkonen and Jenson Button.

“It’s been a while since I’ve heard people say ‘When are you going to go on Top Gear?”,
Ricciardo told reporters at a Red Bull media event in Milton Keynes, England.

“So the time has come… I believe Lewis has got the crown at the moment so it would be nice to take at least one title off him.”

Top Gear host Jeremy Clarkson is a noted fan of Ricciardo, Tweeting last year that the Australian is “the best driver in F1”.

Hamilton used a dominant Mercedes package to take a second world title last year, while Ricciardo was the best of the rest in third.

Below is the show’s current leader board for F1 drivers and the two previous Stig characters.