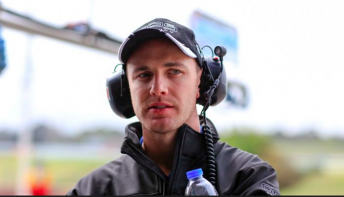 Tim Blanchard’s V8 Supercars career has been revived with confirmation he has taken the second seat at Lucas Dumbrell Motorsport.

“After sitting out a year from full-time driving, I was determined to get back on the grid in 2015,” Blanchard said.

“When the opportunity arose to join Lucas and the team I was rather excited.

“Having worked with LDM last year it became evident that the team were making the rights steps in improving their performance.”

After making his debut in V8 Supercars in 2010, the 27-year old was left without a drive last year after one season full-time with Dick Johnson Racing.

“I learnt a lot throughout 2013 and feel I am much better prepared and have greater understanding of what is required to race at this level.”

“I feel much more prepared this time and really want to use my experience to hit the ground running and get some strong results to start the season.”

“We have been in discussions since last years enduros – he did a really good job and was consistent throughout,” Dumbrell said.

Blanchard will be in charge of the Triple Eight-built Commodore he shared with Ingall last year which has been completely rebuilt in the off season and will carry the #3 which signifies the number the driver used to win the 2007 Australian Formula Ford Championship.

Blanchard and Percat will turn their first laps in the LDM Commodores at the Sydney.com V8 Super Test at Sydney Motorsport Park from February 7-8.