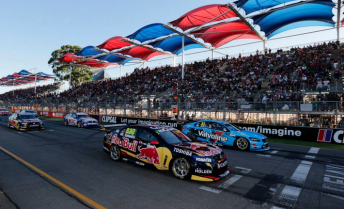 Eighteen drivers, including Craig Lowndes and Scott McLaughlin, will line-up in Adelaide with their 2014 teams

After a relatively stable off-season for the majority of the major players, 18 drivers will again line-up in the same entry as last season.

Dick Johnson Racing’s transformation into a single-car DJR Team Penske and the return of former champion Marcos Ambrose headlines those to have seen changes.

For those in need of a refresher, here’s a summary of the off-season changes.

The 38-year-old made an early start to his V8 Supercars comeback with a wildcard entry at last year’s season-ending Sydney 500.

Walsh lines up for his first full-time V8 Supercars Championship season after four years in the Dunlop Series, which included a runner-up finish in the 2013 season.

Heimgartner is another Dunlop Series graduate stepping up to the main series for the first time.

The 19-year-old made his V8 Supercars Championship debut with Super Black’s wildcard entry at Bathurst last year and joins the team on a full-time basis for its first season.

Securing the second seat at Lucas Dumbrell Motorsport marks a return to full-time duties for Blanchard, who sat out last year after spending the 2013 season with Dick Johnson Racing.

The team expands to two cars following the return of its second Racing Entitlements Contract, which had been the subject of a legal dispute while it lay dormant during 2014.

Ingall has retired from full-time driving after spending his final season with Lucas Dumbrell Motorsport.

The 50-year-old has stated a desire to return for the V8 Supercars endurance events, but is yet to lock away a seat.

Dahlgren has returned to his native Sweden after a rough rookie year in V8 Supercars with Volvo Polestar Racing in 2014.

The 35-year-old will continue to race for Polestar in Europe, extending his decade-long relationship with the Volvo performance arm.

Perkins is once again out of a full-time drive following changes at Charlie Schwerkolt Racing for 2015.

The 28-year-old will return to co-driving duties in the Pirtek Enduro Cup and has been strongly linked to the seat alongside James Courtney at the Holden Racing Team.

Pye has lost his full-time seat at Dick Johnson Racing amid the wholesale changes to the legendary squad.

He is slated to return alongside Ambrose for the Pirtek Enduro Cup events.

Schwerkolt’s REC will run out of Walkinshaw Racing this season following the forklift magnate’s switch from Prodrive.

The exit of Rosenberg’s license is countered by the return of the second LDM REC, leaving the field at an unchanged 25 cars.

Note: While all line-ups have been confirmed by the respective teams, the above list has been compiled by Speedcafe.com and is not an official V8 Supercars entry list.