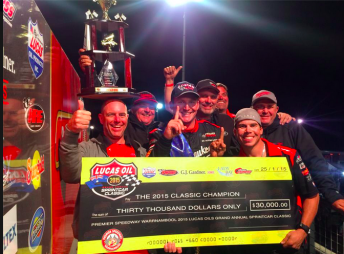 Californian Kyle Hirst claimed the greatest win of his career with a record setting victory at the 43rd running of the prestigious Lucas Oil Grand Annual Sprintcar Classic.

The 26-year-old became the 10th American to win Premier Speedway’s Classic courtesy of a spectacular flag-to-flag win in front of a sellout Warrnambool crowd.

The Monte Motorsport star beat home three time Classic winner Brooke Tatnell and Grant Anderson, who had one of the best results of his career with a third place finish.

Hirst smashed the previous 40-lap race record set in 2008, knocking a whopping 1:13s off the time.

After a tradition started by his countryman Tim Kaeding who won last year’s Classic, Hirst celebrated with a wild series of donuts much to the delight of the enormous crowd.

But the new champ’s celebrations came to a halt after he careered into a truck belonging to the local firework company, which was poised to set off crackers following the completion of the donuts.

“This is the best win of my career,” screamed Hirst after the result.

Hirst took the $30,000 winner’s cheque and becomes the 22nd different winner of the Classic.

It proved a marathon night for everyone at Premier Speedway after two lengthy delays throughout the evening.

The night was halted for over an hour after a wicked crash for South Australian Sprintcar Champion Brad Keller in the final heat of the night.

He had to be cut from his car by SES officials and was taken to hospital for precautionary scans complaining of neck and back pain.

And then Warrnambool’s fickle weather turned during the first B-main which caused a further 90 minute delay.

It meant Hirst’s Classic win came just after 2am on Australia Day morning.

Kaeding raced on in pain on the final night, after a nasty crash on Friday left him hospitalised.

But the likeable American’s title defence ended with a sore neck, and an early exit in the D-main.

“I’m beat up, l need some beer to fix the pain,” Kaeding joked after his weekend was done.

While Kaeding was left in agony, Australian Champion David Murcott was left heartbroken.

After taking victory on Saturday night, Murcott was the top points scorer for the event and started the Classic final from pole. But his race lasted just 10 laps before a mechanical issue struck, leaving the popular Victorian inconsolable.

“It hurts so much because I want that Classic win so damn much,” Murcott said.

For the second straight year the Premier Speedway Club had to lock the gates on the Sunday night, with the crowd at capacity at 5.30pm – two hours before racing began.

Just under 30,000 spectators attended the three nights of the event.