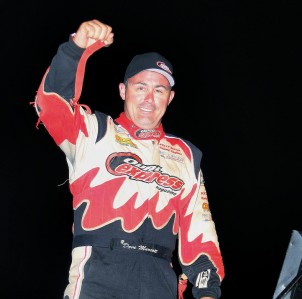 Murcott led from pole position to win a thrilling feature ahead of World of Outlaws duo Kerry Madsen and Daryn Pittman, in front of a 10,000 strong crowd.

But it was only after a pivotal moment on lap 21 of the 30 lap final, where Murcott was challenged for the lead by Luke Dillon.

As Dillon went for top spot, back marker Ryan Jones crashed heavily in turn 4, leaving the Speedweek champion no where to go.

Dillon made contact with Jones, before both were hit by the third placed runner at the time, American legend Jac Haudenschild.

The impact eliminated all three runners and turned the final on its head.

The feature win has left Murcott on top of the points ladder following the opening two’s qualifying for tonight’s 43rd running of the Classic.

“That’s the coolest thing to happen since the Aussie title,” beamed Murcott after the victory.

“I thought we were a sitting duck there at the end with Kerry behind but we got the job done.”

“We’ve put ourselves in a good position for tomorrow certainly being up the pointy end makes life much easier.” 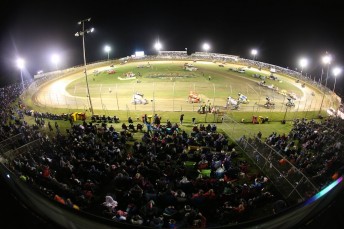 Fans pack night two of the the Classic at Warrnambool

Madsen was satisfied with second place and in a solid position to win a fourth Classic crown.

“There’s so much pressure, it’s so easy for things to go wrong, and you need so much luck here just to survive the qualifying rounds,” Madsen explained after the feature.

“But that’s what makes the Classic so special to win, and that’s what we all want tomorrow night.”

Dumesny was honoured after the race, presented with life membership of the Victorian Sprintcar Association.

Sunday will now see all drivers contest a final heat race before the multiple D, C, and B mains ahead of the 40 lap, $30,000 to win Classic final.

*Speedcafe will have all of the latest from Warrnambool across the long weekend.