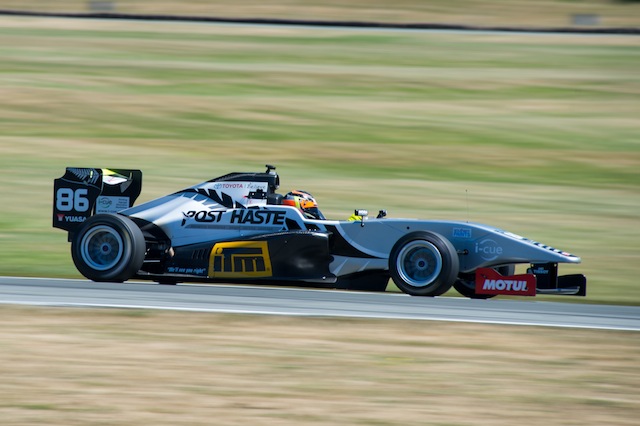 Invercargill’s Brendon Leitch claimed a slice of history by becoming the first local driver to win the Toyota Racing Series feature race, the Spirit of a Nation at Teretonga.

The 19-year-old Leitch has struggled to fully fund his racing but drove the race of his career, fending off a determined charge from young American Santino Ferrucci.

Lance Stroll, the Saturday race winner, repeated his third placing in the middle heat to claim the final podium spot.

Leitch quickly took command of the race, extending a lead of half a second that become two seconds late in the race when Ferrucci slid wide while challenging for the lead.

British racer Sam MacLeod started the race in a strong third place but soon came under attacked from Canadian Stroll and Arjun Maini.

Ferrucci set the fastest lap of the race, a 53.659s tour, at mid-distance.

Through the 20 laps distance, Leitch controlled the race from the front in a mature display, responding to repeated attacks by Ferrucci but managing his car’s grip through the 32 degree heat as track surface temperatures edged toward 50 degrees.

“That was the best race I have ever driven, the car was great. I was able to watch Santino and keep a half second or so on him, then when he slid off I was more confident of holding onto the lead,” Leitch said, who is undertaking his second year in the TRS.

“We’ve been chasing down funding for the series and we still need to add to our sponsorship to complete the series but this is a massive boost. I’m just so happy.”

Australia’s only representative Thomas Randle, who is driving for the ETEC operation, managed an 11th and a pair of eighth place finishes in the second round of the TRS.

The championship battle is now between Stroll on 399 points, Maini on 311 points and Leitch on 247.

The championship now faces a long haul north to Hampton Downs in the Waikato for the mid-point round in the five week series next weekend.

In the TL Class, Kevin Williams of Auckland in his Commodore headed Jamie Gaskin of Wellington (Falcon) and Invercargill teenager Liam MacDonald in his Falcon.

Grant Molloy of Invercargill was fourth in his Falcon while Winton driver Nathan Pilcher was seventh after a grid penalty.

In the second race Ross turned the tables on Bargwanna in the TLX Class after a good battle while Williams and Gaskin were the top two in the TL Class with Southlanders MacDonald, Molloy and Pilcher fourth, fifth and sixth respectively.

In the finale Ross and Bargwanna had an epic dice before the car of Ross began emitting smoke and ultimately into retirement.

Bargwanna went on to win from Richards with Williams completing a clean sweep of the TL Class.

MacDonald was third, Molloy fourth and Pilcher cruised home at the back with problems. Impressive teenager MacDonald repeated his effort from last weekend with another third overall for the round.

Craig Baird and the TKR Commodore were non starters for the weekend after engine issues.