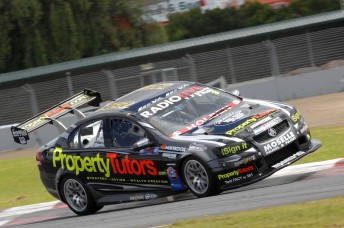 D’Alberto steps in for team owner Angus Fogg who will confine himself to the endurance component of the season later in the year.

Fogg maintains he is committed to the series with the Property Tutors.com Commodore.

The touring car veteran has been forced to miss the series opener, the Rush Security 250 at Hampton Downs from January 31-February 1. He will be racing at the Highlands Festival of Speed at Highlands Park on the same weekend.

“It is awesome to have a driver of Tony’s calibre join the team for a full-on crack at the sprint title,” says Fogg.

“Tony has formed a great relationship with the team and our sponsors, he has proven to be fast in the car at Hampton Downs, and we fully expect him to be right on the pace this weekend.”

D’Alberto, who will share a Maranello Ferrari 458 with Mika Salo and Ben Collins in the Bathurst 12 Hour from February 6-8, is relishing the chance to return to a full-time schedule.

“I’m really excited to be joining Angus Fogg Racing and the PropertyTutors team for the NZ SuperTourer sprint series. Foggy prepares a great car and has the right team around him,” D’Alberto said.

“I must thank Property Tutors and all of the AFR sponsors for giving me this opportunity, hopefully we can turn it on and spray some more champagne for the team.”