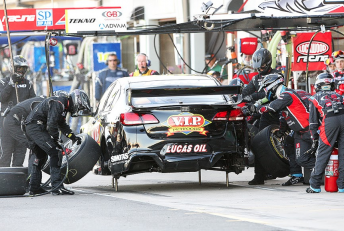 Shane van Gisbergen will have an upgraded Triple Eight package at his disposal this season as he fights the powerhouse team for the V8 Supercars title.

The Kiwi’s Tekno Autosports Commodore will sport the latest-specification Triple Eight front-suspension following an uplift in spend by the customer outfit.

The team is also preparing a new chassis for Van Gisbergen as it pushes to help the 25-year-old tackle Triple Eight’s six-time champion Jamie Whincup for the crown.

Van Gisbergen finished second to Whincup last season, stealing the runner-up spot with his fifth win of the year in the final race of the campaign.

“There have been a few upgrades,” team owner Jonathon Webb told Speedcafe.com of the technical package.

“We spent a bit of time with them (Triple Eight) before we went on break working out what was available and what we could work with. Naturally we spent a few dollars on the way through.

“Some bits and pieces (available from Triple Eight) are niceties and others will give you outright speed,” he cautioned.

“They all cost money, so we’ve been quite considerate in terms of where we spend what we’ve got. We’re still a small family operation.

“We don’t have the power of a Triple Eight, HRT or FPR, but we are stepping forward for the new year.”

Webb is confident that, like Dick Johnson Racing in 2010, Tekno can beat Triple Eight to the title with one of its own customer cars if the small outfit maximises its potential.

Among the areas targeted for improvement is that of pitstops, which as revealed on Wednesday, will this year take place alongside DJR Team Penske.

A second year for Van Gisbergen working with engineer Dr Geoff Slater is meanwhile hoped will improve the consistency of Tekno’s car speed across the season.

Webb confirmed that the team has started building up its spare and as yet un-raced chassis for Van Gisbergen, but says it’s unlikely to debut before Barbagallo in May.

“I’m not overly keen to go to Adelaide with a brand new car,” he said.

“I’ve done that once before and I came back with a heavily broken brand new car (in 2012).

“We’ll at least get through the first bunch of races and then see where we’re at during the break in April.”

The new car will add to the two current-spec V8 Supercars already in Tekno’s stable, with Webb’s own chassis having been unused since the team scaled back to one entry at the end of the 2013 season.

Webb remained tight-lipped on suggestions that Van Gisbergen’s car is set to swap its VIP Petfoods hues for that of Tony Quinn’s sister brand, Darrell Lea.

The team is expected to launch its 2015 look next week, with Webb promising fans “something different” from that seen on the Kiwi’s entry over the last two years.

Van Gisbergen is in action in America this weekend, racing an Alex Job Racing Porsche in the Daytona 24 Hours.