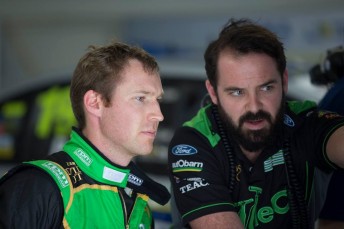 Osborne (right) will move into the new role of chief engineer across the four cars this year, moving away from Reynolds’s entry

Mark Winterbottom and David Reynolds will both be given new race engineers this season following a restructure of Prodrive Racing Australia’s engineering department.

The team has confirmed that Reynolds’ engineer of the last two seasons, Nathaniel Osborne, will fill a new position of chief engineer across the four-car team.

Reynolds has been assigned recent recruit Brad Wischusen as his race engineer.

“With Brad joining the team we thought it was time for a shake-up within the team to put a few sets of fresh eyes in different roles,” explained PRA team principal Tim Edwards.

“Having Nathaniel oversee the engineering group was an important move with the introduction of the FG X.

“I believe the new structure not only rewards the efforts of our existing engineers but will also provide us with fresh ideas to keep up our development and help us move in the right direction.”

Edwards has meanwhile confirmed to Speedcafe.com that Mostert will be given a fresh chassis for the new season.

It will be the first time in the reigning Bathurst winner’s burgeoning V8 Supercars career that he will debut a new car.

The new chassis, dubbed FPR 1218, is expected to get a shakedown run before the February 7-8 pre-season test at Sydney Motorsport Park.

Winterbottom will continue in the chassis he debuted last year, while Reynolds reverts to the car he raced for the majority of the 2014 campaign, prior to its big crash at Bathurst.

Heimgartner’s car will be the former Jeld-Wen entry, which PRA has taken ownership of as part of the split with Charlie Schwerkolt.

The Mostert and Winterbottom cars are both scheduled to start the season in FG X form, with the remaining two to be upgraded early in the season.