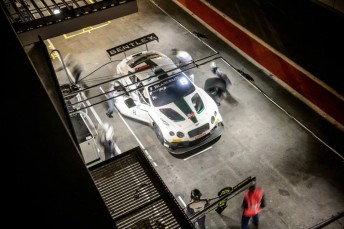 Bentley is kicking off its season at Bathurst

Despite the strength of its line-up, Bentley’s director of motorsport, Brian Gush, says the British marque’s inaugural assault on the race is a “daunting challenge”.

“The whole team is full of anxious excitement about the start of the season,” he said.

“Opening the schedule at Bathurst is certainly a daunting challenge, but our preparation over the winter has been thorough and the cars and drivers are ready.

“The Continental GT3 can do well at Mount Panorama, and if we can set the car up effectively then we should be able to have a good race.

“The Bathurst 12 Hour is becoming one of the great endurance races in the world and I’m delighted that we’re going to compete there for the first time.”

Buhk and Primat combined last year to finish second at Bathurst in the HTP Mercedes and are this year eyeing the top step.

“Making the switch to the Bentley is really exciting, and we want to start at Bathurst as we mean to go on this season – by looking after the car, racing hard and finishing well.

“Harold and I finished second here last year in a really close finish, so naturally we’d love to go one better this year.”