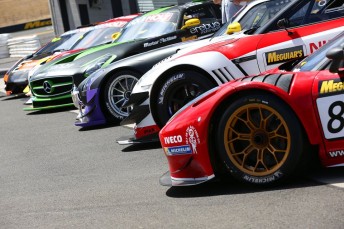 The grid is almost set for the Bathurst 12 Hour

The full list of entries and drivers for the Bathurst 12 Hour is almost complete, with organisers releasing a detailed list of the class runners.

A total of 54 entries are currently listed, with the Mercedes-Benz SLS AMG GT3s of German team HTP Motorsport and Americans Rotek Racing both recent withdrawals.

HTP is now expected to form part of Bentley’s two-car factory effort, while Rotek has taken over a Class B Porsche entry for team owner Rob Holland and Australians Tim Macrow and Peter Rullo.

Race organisers are yet to release a full Class A driver list while it waits on final announcements from Bentley, AF Corse, Clearwater and Motionsport.

Speedcafe.com has, however, compiled the 29-car Class A list from previous announcements.