Penske and Tekno to join forces in V8 pitlane

Penske and Tekno to join forces in V8 pitlane 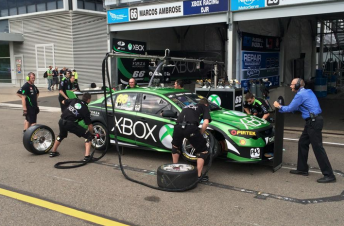 DJR Team Penske and Tekno Autosports have hatched a plan to share a pit bay in this year’s V8 Supercars Championship.

The two teams have agreed to share the bay, boom and selected pitstop personnel during the season, as the single-car Tekno outfit had done with Brad Jones Racing’s third entry last year.

The teams have informed V8 Supercars of their intention to share, with the full pitlane order expected to be confirmed by the category later this week.

BJR’s third car will be the only entry without a pair following the Tekno-Penske tie-up and the expansion of Lucas Dumbrell Motorsport to two cars.

According to DJRTP, pairing with Tekno rather than running its own bay at the end of pitlane will provide important logistical benefits, outweighing the downside of potentially double-stacking behind the Holden under Safety Car induced stops.

“From a logistical point of view it makes a lot of sense,” DJRTP managing director Ryan Story told Speedcafe.com.

“Our workshops are close by (in Stapylton, Queensland) which means the guys can train together between race meetings.

“There are other considerations, like the potential to lose out in double-stack situations, but on balance this is absolutely the right choice for us.

“They are a really good group of people that we look forward to working with this season.”

While the exact position of the Tekno-DJRTP garages in pitlane is yet to be confirmed, moving towards the middle of the order should help Marcos Ambrose’s qualifying efforts.

Those at the end of pitlane lose significant qualifying time over the course of the season due to the field spread on out-laps; an issue exacerbated by the recent trend of shorter sessions.

Tekno team owner Jonathon Webb meanwhile hopes that pairing with DJRTP will help improve his squad’s pitstops as it aims to challenge for the championship with driver Shane van Gisbergen.

“The boys have been working with Penske, which will be good because they’re obviously pushing hard,” Webb told Speedcafe.com.

“The pitstops were an area where we were a little weak last year, so hopefully we can pick-up on those little weaknesses for this season.”

The two garages are expected to operate with a modest wall between the car bays, separating the preparation areas.