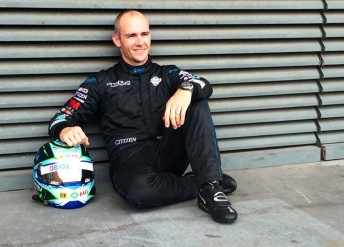 SPEEDCAFE: Lee, firstly, it must be pleasing to have this out in the open after what has been an unusual period for you.

LEE HOLDSWORTH: It’s such a relief. I’ve had everyone questioning me about it and there’s been a lot of rumours since Homebush.

We confirmed before Homebush that we (Schwerkolt and I) were both going to FPR, but obviously things changed and Charlie has signed with Walkinshaw.

But to be honest, my main focus was to end up in a factory team. That was my whole and sole reason why I got out of Erebus, to get into a competitive car.

It’s been stressful not being able to announce it, but now we can just get on with it.

SPEEDCAFE: Was there any uncertainty or stress for you over Christmas? Or were you confident this was going to be the result?

HOLDSWORTH: I was confident that this would be the result.

Charlie was straight up and honest with me from the start, there were no secrets and we worked through it together.

It took longer than we’d hoped but in the end it’s worked out for the best.

SPEEDCAFE: Do you feel this is a better outcome for you, being at Walkinshaws over FPR?

HOLDSWORTH: I just wanted to be with a factory squad. Going to FPR was going to tick that box and going here does as well.

But what happened at FPR after the announcement with Charlie was Ford’s decision to pull money from the team. That did concern me.

I know that Holden has got a really bright future in the sport, so I certainly feel that this is the better opportunity for me and a more secure one long-term.

I think this is genuinely the best opportunity I’ve had to date. I’m really looking forward to the future and what I can do this year.

This is a really important time in my career to be getting results and I have to make the most of this opportunity.

SPEEDCAFE: Is it fair to say that this is the move that’s got to be right if you’re going to end up winning one of these championships?

HOLDSWORTH: Absolutely. At my age, I’m 31 years old and this is the prime of my career. The best years of my career are meant to be over the next five years.

That’s why I had to really focus on getting into the best position to be able achieve what I want to do, which is win races and championships.

But it’s also about enjoying my racing again. Over the past couple of years that’s probably gone out the door a bit.

I’ve enjoyed developing the car but the fun of getting results and being rewarded for your hard work wasn’t there.

You’ve got to live life in the now and that’s what I’m getting back to. This is about right now, not the future. I want to get results as soon as I can.

SPEEDCAFE: Is it going to take a while to rebuild your confidence? Or can you just do a mental reset with a new team?

HOLDSWORTH: Results obviously build your confidence. I can’t just wake up with confidence because I’ve had a good sleep or whatever. It’ll come with time.

Obviously with a few results the confidence comes back and it flows on from there. It’s like a ball of momentum that just builds.

That (momentum) is something that’s been lacking in the last two years, but I know that I can still get the results when the car is right.

It’s nice going into this year having seen what the Walkinshaw cars and team can do.

SPEEDCAFE: Have you had any time yet to get into the factory and meet with your guys?

HOLDSWORTH: I went down there on Friday last week and it was great spending half a day with Alex (Somerset) and the team.

It’s a really good feeling there. You can feel the winning culture.

Everyone wants it (success), but there’s a lot more to achieving it as well.

You need resources, the right people and the attitude in order to go ahead and win races and championships. From what I’ve seen, they have all of that there.

I’m looking forward to the challenge of getting my guys around me and building relationships to get the best results.

SPEEDCAFE: Some may have thought it could be a bit awkward in there for you. The guys there were put together around Nick and clearly, the preference from the team was to keep him on.

HOLDSWORTH: I think they all realise I’m not stealing his drive. It was an unfortunate situation for him with James Rosenberg exiting the sport.

I feel sorry for Nick because he did a fantastic job with those guys and got some excellent results. I’m sure he would have just built on that this year. It’s good to see that he’s got himself in another seat.

I certainly didn’t see any ill feelings towards me. They all understand the situation and I know that if I’ve got the car I can do the job for them.

SPEEDCAFE: You’ve got some very accomplished team-mates at Walkinshaw Racing. I imagine it’s going to be pretty competitive between the four of you.

HOLDSWORTH: Absolutely. There’s nothing wrong with a bit of competition between team-mates.

We can all push each other and hopefully I can get on top of this car as quickly as I’d like.

It’d be great to go to Clipsal feeling confident and comfortable, but realistically it’ll take a couple of meetings to learn everyone around me and what I need out of the car.

I’m good friends with Tim (Slade) and I get on with JC (James Courtney) and (Garth) Tander as well, so I think we’re going to have a really good group that’ll push each other to the limits.

SPEEDCAFE: What are you going to need to have done during the year in order to be happy with your season?

HOLDSWORTH: My main aim is just to get back in the top 10 in the championship. I think that’s a very realistic goal.

It’s not a high aim but it’s hard to assess before getting in the car. If we go out at Clipsal and run top five the expectations will change.

But a top six or eight in the championship would be a really good result. The first goal, though, is to get back in that top 10.

SPEEDCAFE: Tim had a really tough slog for much of his first year with the team in 2014. Does seeing that temper your goals just a little bit?

HOLDSWORTH: To be honest, when Tim started there he was going well and then he clearly had some problems mid-year before turning it around again.

That showed me that he could do the job in those cars. We’ve always been very close in results and speed, so it gives me confidence.

Looking at Nick Percat, what he did in his rookie year as well, that gives me confidence that the car can do the job too.