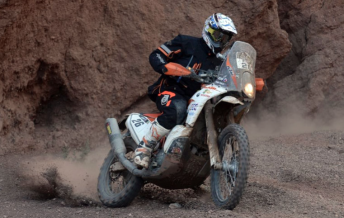 Australian motorcycle rider Toby Price has boosted his Dakar Rally podium hopes with a maiden stage victory on the penultimate day of the gruelling event.

The 27-year-old has proved to be one of the surprises of this year’s rally having held a place inside the top five for the majority of his debut Dakar appearance.

The New South Welshman came close to a stage win when he finished second on Stage 6 last week.

However, a maiden stage victory has further boosted his hopes of reaching the finish of the demanding rally inside the top three, with Price now more than 10 minutes clear of podium rival Pablo Quintanilla, who finished the test in eighth.

“It’s my first go at the Dakar, but like we say, we’ve still got one day to go,” said Price.

“Anything could happen and at this stage everything is just feeling good. We’re enjoying it, so it’s been a good experience.

“There have been a lot of highs and lows and good learning curves as well as a few mistakes, but we’re trying to fix them as best as we can and get to the finishing line.

“Hopefully, that will happen. I always knew it was going to be difficult, but you don’t know until you actually come here and have a go and then you actually find out how really hard it is.

“We were fairly well prepared coming into the event. We’re just going to come back next year hopefully, now that we know what we’re in for and be an even bit better prepared again”.

The Spaniard leads Goncalves by 17 minutes and 49 seconds while Price is a little over eight minutes further back.

In the car class, Nasser Al-Attiyah is within touching distance of Dakar victory having completed the penultimate stage in fourth position.

The Qatari driver managed to stretch his lead to 35 minutes and 39 seconds as rival Giniel De Villiers backed off in a bid to preserve his second spot overall.

The rally reaches its climax later today with the final 393km stage from Rosario to Argentina’s capital city Buenos Aires, where the event began on January 4.