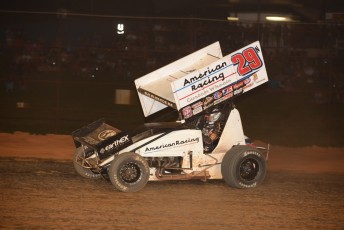 Kerry Madsen showed exactly why he is one of the top 10 Sprintcar drivers in the world in the first night of the Scott Darley Challenge at Valvoline Raceway.

Madsen progressed from the C-Main to take victory in the $19,000-to-win opener.

Being mired in the last chance qualifiers, the Sydney-sider scythed his way through the C-Main, then elevated himself from the rear of the B-Main and into the Main Event.

He methodically picked his way through the field and hunted down young American racer, Brad Sweet and local hero, James Thompson – who was having one of his standout drives of the season.

Madsen was elated in victory lane.

“It felt like we must have done 100 laps tonight and passed so many cars,” he reflected.

“I really enjoyed racing like that though, the car was fast and the track allowed me to come through.

“It’s a really satisfying feeling to win this for the Darley Family and for my team who gave me such a great car.”

With Sweet second and Thompson third another come from behind finish was Madsen’s fellow B-Main graduate, Sammy Walsh.

The second generation racer charged his way forward on a superb racetrack to secure fourth place.

Tonight, another $19,000 is up for grabs in what is sure to bring a huge crowd to Valvoline Raceway.