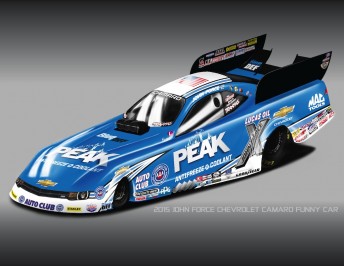 NHRA Funny Car star John Force has announced a fresh multi-year deal that sees him join forces with Chevrolet from the beginning of the 2015 Mello Yello Series season.

Mid-way through 2014, John Force Racing was rocked when long term manufacturer partner Ford announced it was pulling out of drag racing, which added to Castrol and five other sponsors withdrawing from the JFR program.

The Chevrolet deal is a homecoming of sorts for the 16-time NHRA champion.

“To have an opportunity to go back to my roots means a lot,” Force said in a global media conference.

“I got my first win in a Chevrolet, my first NHRA Championship and six overall with General Motors. It’s a great time.”

The cars will carry the iconic bowtie logo as well as backing from Peak Antifreeze and Lucas Oil – as well as existing sponsors Traxxas remote control cars and the Auto Club of America.

The team will use the Camaro body and will have a virtual GM hold over the Funny Car category.

Nevertheless, the lateness of the arrangement with Chevrolet (which came together just prior to Christmas) has meant the team has built the body but is yet to wind tunnel or track test the car.

Chevrolet/GM’s Vice-President of performance vehicles and motorsport, Jim Campbell has committed to ramping up its activation focus at NHRA events and in dealerships utilising the star power of the Force family.

The deal adds to the company’s position as official truck supplier to the NHRA Series, as well as major sponsor of one NHRA event.

The NHRA Mello Yello season begins across the weekend of February 6-8 with the Pomona Winternationals.