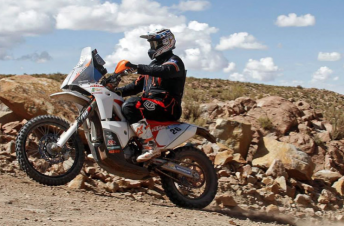 Australia’s Toby Price is well placed to claim a podium finish on his Dakar Rally debut having finished Stage 11 inside the top three.

The 27-year-old from New South Wales has moved to third position overall in the motorcycle category of the gruelling event after taking time out of podium rival Pablo Quintanilla on the 512km run to the Argentinian town Termas Rio Hondo.

Price proved to be the quickest of the lead group on the route with the KTM rider finishing the test in third spot, one place ahead of rally leader Marc Coma and crucially almost two minutes faster then Quintanilla.

As a result, the Australian, who was also just 42 seconds adrift of stage winner Ivan Jakes, has climbed into third position for the rally with a minute and 32 second buffer over Quintanilla.

Despite being only two days away from the finish, Price remains cautious regarding talk of securing a highly impressive top three finish on his event debut.

“I can’t get too excited just yet. Two days is still a long way away. There are still a lot of kilometres to cover,” said Price.

“We’re just trying to do the best we can, stay fit and healthy, keep the bike in good shape and that’s just been my plan the whole way, pretty much.

“We’re doing all we can and at this stage we’re having fun while we’re doing it. It’s not too far from the finish.

“It wasn’t extremely fast, but it was a good clean run with nothing crazy. You couldn’t afford to run wide on turns. It was just a good clean day, that was the main goal, to look after the bike, because it was marathon day.

“You don’t want to be stuck out there or destroying the bike and we’ve done that so we’re happy.”

Coma continues to lead the rally by a relatively comfortable 21 minutes and 12 seconds from Paulo Goncalves.

Nasser Al-Attiyah remains on course to take victory in the car class after recording victory on Stage 11.

The Mini driver was 27 seconds quicker than team-mate Orlando Terranova on the route while Al-Attiyah’s rally rival Giniel De Villiers was a further 12 seconds back in third.

Al-Attiyah’s overall rally lead over De Villiers stands at 29 minutes and 1 second with just two days of the event remaining.

However, the battle for third has developed following a mechanical drama for Yazeed Al-Rajhi which has dropped him out of the running.

Polish Mini driver Krzysztof Holowczyc has taken over third spot but is almost an hour and 30 minutes adrift of leader Al-Attiyah.

The rally continues with a mammoth 1,024km run from Termas Rio Hondo to Rosario which constitutes the penultimate stage.