LDM will enter its sixth V8 Supercars season in 2015

The Queenslander has joined LDM after 15 years at Stone Brothers Racing/Erebus Motorsport, which included guiding Russell Ingall to the 2005 title.

Hay has been in a workshop-based role since suffering permanent inner ear damage when an air jack exploded during a pitstop at a test day in 2009.

Relocating to Melbourne, Hay has effectively been handed the keys to LDM’s racing operations as it returns to a two-car line-up for the new season.

Walkinshaw Racing refugee Nick Percat has already been confirmed in the squad’s line-up, while Tim Blanchard leads the race to to secure the second seat.

The 27-year-old Blanchard co-drove with LDM during last year’s Pirtek Enduro Cup and has previous experience as a full-timer with Dick Johnson Racing in 2013. 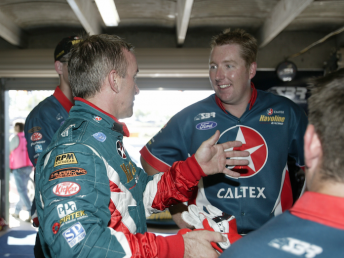 Hay worked closely with Ingall during his time at SBR

LDM has purchased the ex-Dean Fiore Dodo Holden in line with its expansion, which will start the season alongside the squad’s existing chassis.

The Commodore was campaigned by LDM in 2013 while owned by Fiore’s sponsor R&T Pumps before laying dormant throughout last year.

The team’s fabrication partner, Jimmy’s Fab Shop, has meanwhile been accredited as a V8 Supercars chassis builder and has already started construction of two new chassis, which LDM hopes to have online by mid-season.

A strengthened technical link with Triple Eight is also being negotiated in a bid to help propel the team further up the grid.

Hay has already begun the task of recruiting new staff to the team, which will retain as few as two of its track crew from last year.

New faces include former Erebus mechanic Janelle Navaro, who will take-up the role of lead mechanic on one of the cars.

“We’ve had a massive clean out of the workshop, everything has been shaken-up and revisited,” Hay told Speedcafe.com.

“It’s just going to be a matter of getting the right people together, because I think we’ll have the drivers that we need.

“I wouldn’t have left a team that I’d been with for 15 years for something that I didn’t think had potential.

“I’ve been lucky enough to have spent a very long time working closely with the Stone brothers and you don’t realise how much guys of that quality have taught you until you get into this situation.

“I’d like to put in place a lot of the ideas that they had and a big part of that is people.

“The same key group of people basically didn’t shift there for eight years and you can see the same thing happening with Triple Eight now.

“A champion team will beat a team of champions all day long and that’s what I’m really trying to instil here.

“We (LDM) can only improve and I love that underdog status. It won’t be easy but if we work really hard and get the basics right, we’ll start to move forward.”

Brendan Hogan will continue as one of the team’s race engineers having worked alongside Scott Pye and Russell Ingall at the team in recent years.

Campbell Little, who joined LDM at several events during the latter stages of last season, is not expected to return to the team’s line-up.

Hay’s position will also see him involved in the squad’s commercial operations as it continues to work on sponsorship for the two cars.

Personal sponsors Coates Hire and Morris Finance are expected to follow Percat to the team, while 2014 backers Phil Munday and Holden are both set to remain part of the fold.