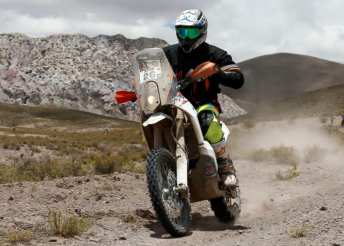 Toby Price has moved to fourth overall on Dakar debut

Marc Coma has emerged as the new leader of the Dakar Rally motorcycle class after a disastrous day for long time pacesetter Joan Barreda on stage eight.

The 781km timed run from Uyuni to Iquique provided riders a mammoth challenge with competitors once again unable to call upon support crews.

Only the motorcycle class tackled stage eight as the car, truck and quad categories embarked upon a rest day.

Chile’s Pablo Quintanilla gave the local crowd plenty to cheer as he claimed the stage, moving him into contention for outright victory lying third overall.

Spain’s Juan Pedrero Garcia trailed Quintanilla by just 11 seconds ahead of Slovakia’s Stefan Svitko and Australia’s Toby Price, who was just 41 seconds adrift of the stage winner in fourth.

However it was Coma, who ended the day on top overall despite the Spaniard being more than seven minutes adrift of the leading pace.

The KTM rider has opened up a lead of 9 minutes and 11 seconds as long time leader Barreda’s Dakar hopes were dealt a severe blow.

Having led the majority of the event, Barreda, who damaged his handlebars in an accident on stage seven, hit trouble which cost him more than three hours while he was towed to a rally checkpoint.

He eventually made it to the end of the test but the time lost has effectively ended his chances of overall victory.

As a result, young Aussie Price has subsequently moved into fourth position with the Newcastle rider now eyeing an impressive top three finish on his Dakar debut.

The 27-year-old is just 15 minutes and 56 seconds behind leader Coma.

The Dakar Rally continues today with all categories due to tackle the 539km run from Iquique to Calama.