Rain hits Roar before the 24 test at Daytona

Rain hits Roar before the 24 test at Daytona Wet conditions saw a subdued end to the three-day Roar before the 24 test ahead of the January 24-25 Daytona 24 Hours.

Just 10 of the 53 cars present took to the track for the final sessions due to the weather.

“I’m not excited so much about the time, because that means nothing, but the fact we got the car a little bit better is very encouraging,” said Barrichello, who has just one previous start in a Daytona prototype to his name. 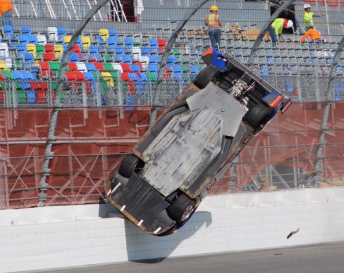 A tyre failure was blamed for DeFoor’s specular accident. pic: FormulaFotos via Twitter

“We have a lot to do yet (before the Rolex 24), but I’m enjoying driving very much.”

The test was hit by a major accident on Saturday that saw Bryon DeFoor escape injury when his Highway to Help Riley-Dinan spun and took flight on the front-stretch.

The incident was triggered by a tyre failure, which supplier Continental dismissed as an isolated issue.

The DeltaWing’s test also ended with an accident after former Ganassi driver Memo Rojas crashed the radically-styled coupe at Turn 4 earlier in the day. 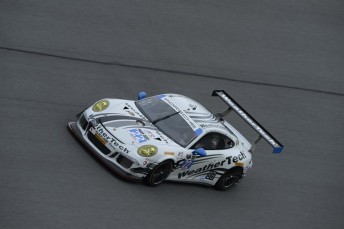 Australian Ryan Briscoe’s Corvette was fourth in GTLM as the Sydney-born driver prepares for another tilt on the race with the factory squad.

CLICK HERE for the combined result from the three-day test.