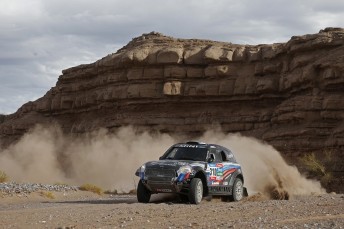 Vladimir Vasilyev on his way to Stage 5 victory

Russian driver Vladimir Vasilyev notched up his first stage win on the Dakar Rally as Nasser Al-Attiyah extended his lead on Stage 5.

The Mini driver completed the 458km stage from Copiapo to Antofagasta just 20 seconds quicker than the Yazeed Racing Toyota of Yazeed Al-Rajhi.

American Robby Gordon was third fastest just ahead of the Mini of Nasser Al-Attiyah, who stretched his overall lead to 10 minutes and 35 seconds over Giniel de Villiers, who finished sixth on stage five.

Peugeot’s Stephane Peterhansel was fifth quickest which helped the Frenchman move into ninth in the overall standings.

However, drama struck team-mate Carlos Sainz who was forced into retirement after rolling his 2008 DKR 20 kilometres from the stage finish.

Marc Coma took two minutes out of Joan Barreda’s lead in the bike category with his first stage win of this year’s event.

The pair ran closely throughout the stage before Coma took control in the closing stages of the test to cross the finish line 2 minutes and 16 seconds ahead of Barreda.

The victory has cut Barreda’s overall lead to 10 minutes and 33 seconds. 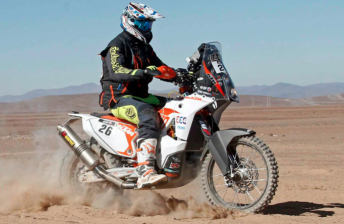 Newcastle’s Toby Price maintained his place in the top 10 overall as he clocked the 10th fastest time on the stage.

“It was another really tough stage, we started stage 5 in 19th position and made our way through to 10th which is positive,” said Price.

“There was a lot of dust today which made it extremely tricky to see stones and the correct tracks, you had to really pay attention all day.

“I’m starting to find my bearings a little better with the road book which is great, it’s all about learning for me. There’s still the second part of the rally ahead of us which includes to marathon stages.”

The Dakar Rally continues today with a 600km plus run from Antofagasta to Iquique.