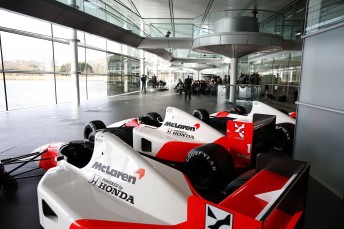 The team will uncover its 2015 challenger in an online launch due to take place in the week of the first pre-season test held at Spain’s Jerez circuit (February 1-4).

Fernando Alonso and Jenson Button will pilot the MP4-30 this season which also marks Honda’s return to F1 after pulling out of the sport at the end of 2008.

Details of the F1’s in season testing schedule have also been revealed with just two tests confirmed at Barcelona and the Red Bull Ring. On two of the four days teams will have to run rookie drivers.

The two-day tests will take place on the Tuesday and Wednesday after the Spanish Grand Prix on May 10 and the Austrian Grand Prix June 21.