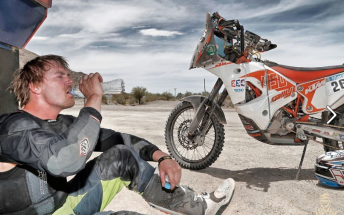 Australian motorcycle racer Toby Price has moved into the top five overall after an impressive run through the Dakar Rally’s longest stage.

The 27-year-old from Newcastle managed to clock the fifth fastest time over the 518km stage from Villa Carlos Paz to San Juan, which has moved him to fifth overall in the bike category.

Price, who is making his debut at the gruelling event, is just 11 minutes and 32 seconds adrift of the leader Joan Barreda Bort, who won stage two with a time nine minutes quicker than the Australian KTM rider.

Opening day leader Sam Sunderland lost more then two hours on the demanding second stage when he lost his way in the final section of the run.

“Today was a good day for me,” Price said via his Facebook page.

“We got through first 300km really well at a fast pace, the navigation wasn’t to hard but you still had to really stay on top of your road book.

“Beyond the 300km point I made a small mistake trying to pass another rider when I thought I might had missed a waypoint and started to second guess myself.

“I then back tracked to find the waypoint and found myself back where I turned around, to be honest it was all over the shop. It just goes to show how much experience you need to master this crazy race.”

Meanwhile in the car category, Nasser Al-Attiyah made amends for his penalty that cost him the stage 1 win with a commanding drive to victory on the challenging second stage.

The Qatar driver’s dominance has seen him assume the overall lead of the event with a healthy 7 minutes and 32 second advantage.

“We won the stage and this was a big thing today,” said Al-Attiyah.

“This is the key of this Dakar. Now we can go calmly until the rest day. For the marathon day we can go really easily, but we will try every day to be like this.”

Al-Attiyah was pushed hard by X Raid team-mate and rally leader Orlando Terranova throughout the stage before the Argentinian suffered a crash towards the end of the test.

The local racer rolled four times before ending up in a ditch where he lost 20 minutes which saw the Mini driver drop to 10th overall.

The Toyotas of Giniel De Villiers and Bernhard Ten Brinke moved into second and third respectively after American Robby Gordon, who had held second after the first stage, encountered brake issues.

Peugeot’s factory return to the event is yet to ignite with Carlos Sainz the top runner in seventh after losing 20 minutes due to a clash with a motorcycle competitor.

The Spaniard’s team-mate Stephane Peterhansel is languishing down in 22nd position after a gearbox issue.

Australia’s Geoff Olholm was more than four hours adrift of Al-Attiyah’s pace which has seen him slide down the order.

The Dakar Rally continues later today with a 500km plus run from San Juan to Chilecito.