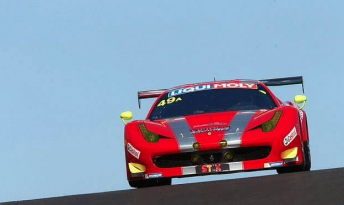 The 50-year-old veteran will bring a wealth of experience to the Australian Ferrari 458 squad having contested 20 grands prix with Simtek, Forti and Pacific teams, before enjoying a successful career in sportscars.

Since switching to sportcars, the Italian has competed at the prestigious Le Mans 24 Hours, while claiming titles in the Italian GT Championship and the International GT Open Series, behind the wheel of Ferrari machinery.

Montermini is also no stranger to Mount Panorama having contested the 2003 Bathurst 24 Hour alongside David Brabham in BE Racing’s Ferrari 360GT.

However, his arrival at Vicious Rumour Racing has scuppered V8 Supercar driver Dean Canto’s Bathurst 12 Hour plans as the South Australian had been hoping to retain his seat at the team after last year’s shortened Bathurst 12 Hour assault.

As a result of the late shuffle, the two-time V8 Supercars Development Series winner is again facing another year with limited miles before racing in the Pirtek Enduro Cup with David Reynolds.

“Last year we didn’t get to participate but the three practice laps I did were pretty exhilarating and I was looking forward to returning,” Canto told Speedcafe.com of the 12 Hour.

“I was pretty pumped to be doing it again but after a few late changes in the team it’s not to be now.

“Unfortunately at this late stage it’s getting tight for available drives in a competitive car.”

After witnessing the team’s retirement after first practice at last year’s Bathurst 12 Hour, regular driver Loberto is hoping for a much more positive run on February 7-8.

“It will be great to return to this event after an unfortunate accident in Practice 1 ruled us out of the event before I even sat in the car this year,” said Loberto.

“It has been a lot of fun campaigning the Ferrari 458 Challenge EVO with great success in selected rounds of the Australian GT Championship, and working on the various GT test & development programmes throughout 2014; and once again joining the VRR team for B12Hr is going to start 2015 off on a high.

“I believe the Bathurst 12 Hour is the best race in Australia, and the ever-growing field of high quality cars and drivers from abroad is evidence of this.”