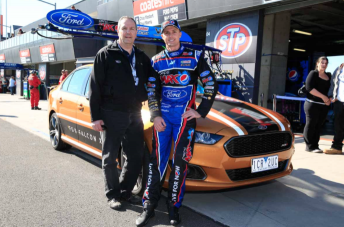 In its last year of manufacturer support Ford will debut the final iteration of the iconic Falcon racer in V8 Supercars in 2015.

Ford Performance Racing and DJR Team Penske will upgrade to the FG X model for the new season, which is due to undergo V8 Supercars’ homologation procedure in the new year.

The project, which has been part funded by Ford, will be the manufacturer’s last supported program in Australia following the announcement it will withdraw its support from V8 Supercars at the end of the 2015 season.

However, both FPR and DJR Team Penske have hinted they will run the FG X through to 2017 when V8 Supercars launches its Gen2 rules package.

In recent years Ford has enjoyed some success in V8 Supercars but the last time it guided a driver to the V8 Supercar title was when James Courtney secured the crown for Dick Johnson Racing in 2010.

Last season in the hands of FPR and Mark Winterbottom in particular, the FG Falcon threatened to strike gold again having led the series at the halfway mark.

While a lacklustre second half of the campaign dashed title hopes, the Falcon has conquered the marquee Supercheap Auto Bathurst 1000 for the last two years, with victories for Winterbottom and FPR team-mate Chaz Mostert.

With an all new product set to debut in 2015, this week’s Pirtek Poll asks: Will Ford’s FG X win a V8 Supercars championship?