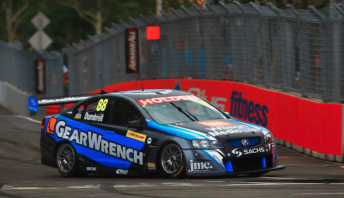 A part of the Apex Tool Group, GearWrench has a heavy involvement in motorsport locally through its association with V8 Supercars champion team, Red Bull Racing Australia and internationally with a presence in NASCAR and with Australian NHRA Pro Stock driver, Shane Tucker.

The brand started life in the 1920s as K D Tools which provided tools for the build of the Model-T Ford and sold its 100 millionth wrench in 2002.

The company will use its association to access the automotive trade and expand its exposure to the Australian motorsport community.

GearWrench will also launch its new website on the back of its Speedcafe.com partnership in the coming months, while also building its social media presence.

It will be the presenting partner of the V8 Supercar and F1 Form Guides which boast a wealth of information and are a great read for fans before each round of those respective championships.

For Apex Tools Group General Manager, Grant Davey, the new partnership with Speedcafe.com is a natural one.

“Speedcafe.com is one of the strongest performing motorsport media products in the world today and GearWrench is the benchmark when it comes to hand tools,” said Davey.

“Our tagline is ‘Get it Done’ and the team from Speedcafe.com are consistently on the ball and very much ‘Get it Done’ on a daily basis.

“Presenting the V8 Supercar and F1 Form Guides is an excellent way for us to engage with the fans and get them involved with our brand and we have a few more things planned around our overall online strategy which will evolve in coming months.”

“In the tool world, GearWrench is known for its quality and its ability to deliver productivity through strength, speed and access,” said Emberson.

“These are the tenets we like to apply to Speedcafe.com – it consistently allows us to deliver the news to our readers first, fast and free.

“The site has experienced phenomenal growth in 2014 and we anticipate that will continue come 2015 around some of the exciting things we have planned, thanks to our loyal existing partners and exciting new relationships with brands like GearWrench.

“Grant (Davey), Marketing Manager, Mark Maclean and the GearWrench team have been active in working with us to put together a solid marketing program to leverage their Platinum Partnership against the race teams and activities they sponsor and I’m comfortable that they’ll see a measurable result.

“The involvement of all our Platinum Partners is the only way we can keep the site First, Fast and Free for the fans and we ask our readers to consider their products and services as regularly as possible.”

Speedcafe.com has exceeded 26 million page views throughout 2014 to date and has increased unique visitors to the site by almost 20 percent.