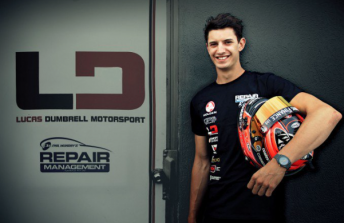 New Lucas Dumbrell Motorsport recruit Nick Percat says he is eagerly anticipating the challenge of lifting the team towards the sharp end of the grid next year.

The 26-year-old has been handed a lifeline by the squad to continue his full-time V8 Supercars career after losing his drive at Walkinshaw Racing.

Having put pen to paper on a multi-year deal at LDM, the South Australian will be the team’s lead driver as the operation expands to a two car effort for 2015.

After an impressive debut season in the category, which saw him claim podium finishes at Sydney Motorsport Park and Bathurst, Percat is confident LDM has all the tools required to progress up the grid next year.

“To come here and be lead driver is a different scenario to what I have been used to, but LDM has very good equipment, a Triple Eight Race Engineering-built Holden Commodore, and all the right people,” said Percat.

“This team has grown up considerably in the past 12 months and I want to help it continue building momentum – we can show everyone what we are all truly capable of.”

Team boss Lucas Dumbrell moved quickly to secure Percat, a driver which he believes will become a crucial part of the development of his team.

“Nick thought, through no fault of his own, it was going to be a pretty average Christmas for him so I’m thrilled that we’ve been able to bring him some joy for the festive season,” said Dumbrell.

“I believe Nick’s signing with LDM is the next step in our development as a team.

“The whole team is, and we all go away for the Christmas holidays knowing we’re going to hit the track running in 2015.”

LDM are yet to confirm the identity of its second driver although it is understood its endurance co-driver Tim Blanchard, who partnered Russell Ingall this year, is among the candidates in contention for the seat.