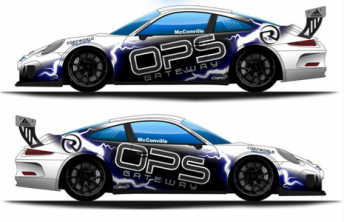 The 40-year-old will join Ross and Michael Almond’s South Australian operation behind the wheel of a second Porsche 991 GT3 Cup car, backed by OPS Gateway.

McConville made sporadic appearances on track this season but next year’s Carrera Cup campaign will mark a return to regular racing for the former Porsche Cars Australia motorsport manager.

At this stage he will dovetail his racing schedule around his motorsport development manager duties at the Confederation of Australian Motor Sport (CAMS).

Although the launch of the inaugural CAMS Jayco Australian Formula 4 Championship, which begins at Townsville on July 10-12, may see the Victorian miss rounds in the second half of the year.

“Certainly a full season is the plan,” McConville told Speedcafe.com.

“I started talking to Ross (Almond) a few months back and it has just fallen into place.

“I’ve said to Ross and Michael (Almond) all along that I have quite bit of workload this year with Formula 4 getting off the ground in 2015.

“We will get to Townsville at least when F4 kicks off and then we will make a decision from there.

“Working for a living has to take priority but certainly the plan is to roll two cars out in similar liveries at Clipsal and run the cars for the whole season.

“Its serious but is not too demanding on time, its a good balance.”

In his role at Porsche this year, McConville has completed a handful of laps in the current Carrera Cup car, but February’s Clipsal 500 will be his debut in the category.

“I’ve done a couple of laps in Craig Baird’s car this year but its kind of ironic that the previous motorsport manager turns up on the grid,” added McConville.

“I also see my role as a bit of mentor for Michael (Almond) and to help lift the team to the next level.

“There is no doubt I’ve missed driving over the last couple of years so it ticks two boxes.”

McConville’s stint in the 2012 V8 Utes Racing Series was his last full season of competition in Australia.