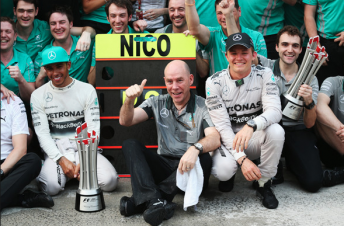 Lewis Hamilton’s performance engineer Jock Clear is set to leave Mercedes to join Ferrari as the team’s head of engineering.

Clear’s move to the Maranello team is part of the squad’s restructure under new boss Maurizio Arrivabene with the Englishman selected to replace Pat Fry, who left the team last week along with chief designer Nikolas Tombazis.

Arrivabene confirmed the capture of Clear in a press conference at Ferrari’s Fiorano test track but it is yet unclear when he will be released from his role at Mercedes.

“Jock Clear is to take the ex-position of Pat Fry, the role is the same,” said Arrivabene.

“We are talking now with Mercedes to try to have Jock as soon as possible. We respect agreements and regulations.”

Clear will bring a wealth of experience to Ferrari having worked at Williams, BAR, Honda, BrawnGP and Mercedes, where he played a part in Hamilton’s charge to a second world championship this year.

His defection from Mercedes to Ferrari is expected to be the last of the staffing changes at the Italian team ahead of next season.