POLL: What was the most memorable V8SC moment in 2014?

POLL: What was the most memorable V8SC moment in 2014? 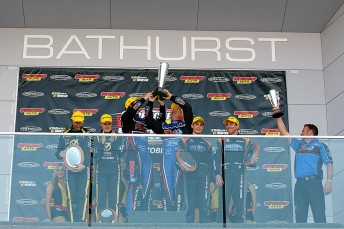 What was your most memorable moment in the 2014 V8 Supercars season?

The 2014 V8 Supercar Championship season will go down as one which saw the record books rewritten by the most dominant driver of any era, Jamie Whincup.

Whincup moved clear of Australian Touring Car greats Ian ‘Pete’ Geoghegan, Dick Johnson and Mark Skaife to sit as the outright record-holder of the most amount of championships at six.

After being put to the test Whincup and his Triple Eight squad knuckled down and began a fightback on the streets of Townsville which ultimately saw the Gold Coast-based star put the championship to bed by the Phillip Island round in November.

The season saw many tumultuous moments starting with Scott McLaughlin’s ‘give it some jandal’ comments after finishing second in Race 2 at the Clipsal 500.

A day later the old firm of Adrian Burgess and James Courtney were quick to find their winning touch by securing the main Sunday race at the Clipsal 500.

There were a mixed and varied collection of memorable moments from Lee Holdsworth lifting Erebus to a maiden win at Winton to the first V8 Supercars Championship race victory for the Volvo S60 at Barbagallo.

Australia’s greatest motor race, the Supercheap Auto Bathurst 1000 was memorable for a myriad of reasons none-the-least the last-to-first victory for Chaz Mostert and Paul Morris.

Cast your mind back on the 2014 season and have a vote on your most memorable moment on the poll below.