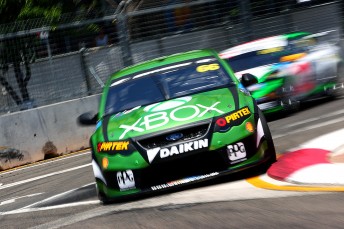 After one-off backing for Marcos Ambrose’s V8 Supercars return as a wildcard entry for the recent Sydney NRMA 500, Xbox is keeping its options open for future sponsorship in the category.

Alan Bowman, Microsoft’s Asian regional vice president for retail sales and marketing, confirmed the deal did not stretch beyond the Sydney event.

“We only committed to do Sydney, but we are keeping our options open,” Bowman said.

DJR Team Penske is expected to rotate through several primary sponsors for its single-car entry next season, mirroring the model more commonly seen in NASCAR and IndyCar.

Long-time Xbox brand ambassador Mark Skaife expects to be central to any future plans the Microsoft-owned gaming giant is cultivating in V8 Supercars.

That campaign promoted its then soon-to-be-released Forza 5 console which gained widespread publicity with the car claiming a top 10 finish at Mount Panorama.

“We had such a great success with Bathurst last year,” Bowman said.

“We really connected with our fans and we wanted to make sure we continued on with that.

“Xbox for us is really the home of racing and providing those great experiences. We put Bathurst in the game last year.”

Skaife masterminded the Xbox sponsorship package for the #66 DJR Ford which saw Ambrose have an exploratory run back in V8 Supercars ahead of his full assault for DJR Team Penske from next year.

“At the start it was my idea to talk to John Crennan when I knew the wildcard thing was coming up,” Skaife told Speedcafe.com

“Because I put the wildcard package together for Triple Eight with Priaulx and Ekstrom this was an opportunity that came out of nowhere with Marcos coming back early.

“This is a good way into Christmas with Xbox so I was immediately on the phone to John and that’s how it started which was in August.”