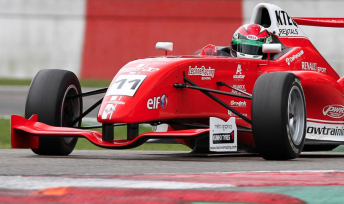 The 19-year-old has turned heads by winning the Formula Renault 1.6 NEC Championship having made the move from Australia to race in Europe this year.

Having dominated the championship this season, the Victorian has now secured a coveted drive with the renowned Koiranen GP squad in the fiercely competitive seven round Formula Renault 2.0 Eurocup series.

The former Australian Formula Ford champion has already tested with the team in preparation for next year’s campaign.

“Joining Koiranen GP for Eurocup is such a great opportunity for me,” said De Pasquale.

“We had a strategy to get the best seat in the competition for both my development and future success.

“I love the winning environment and the professional way in which the team operates – it just felt right from the very first test.

“I know how tough this category is and the team is already into understanding and focusing on my development to become a winner at this level”.

De Pasquale’s manager Mark Larkham is confident his driver has all the skills required to succeed in the Formula Renault Eurocup championship, which begins at Spain’s Aragon circuit on April 25-26.

“Anton has done a great job in the car this year, and I see in front of me a young man who, day by day, test by test and race by race is listening, learning and maturing into the more complete driver he will need to be to succeed at the next level,” said Larkham, head of the Australian MotorSport Academy.

“Formula Renault 2.0 Eurocup with Koiranen GP is one of the most sought after seats in Europe, so I’m really pleased for Anton we hit that target, he earned it, but now it gets really serious.”

During the off-season De Pasquale has also clinched one of four wildcard places in the FIA Young Driver Excellence Academy.

The FIA Institute initiative designed to help nurture young talent will be conducted over five workshop camps at various locations across Europe during 2015.

Alongside this opportunity the young Aussie will participate in the Red Bull Racing Simulator Development Program throughout next year at the Formula 1 team’s base at Milton Keynes.