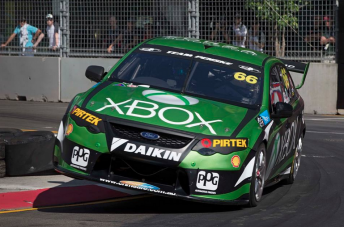 Dick Johnson Racing’s transformation into its single-car DJR Team Penske form has continued with a staff restructure and the ramping up of American engineering input.

Seven staff, including David Wall’s former engineers Chris Stuckey and Jarrod Bowles, will not transition to the new DJRTP entity, which springs to life on January 1.

The team has confirmed to Speedcafe.com that it will run just a single car for Marcos Ambrose while, as previously reported, its second Racing Entitlements Contract will be leased to Super Black Racing.

The move comes after the team proved unable to find the funding to run a second car for Scott Pye, who is now expected to co-drive with Ambrose at the three Pirtek Enduro Cup events.

“2015 will be a building year for us,” a DJR spokesman told Speedcafe.com following the staff changes.

“We will have a one-car program in place with car #17 and Marcos. The current #16 REC will be used by Super Black Racing, subject to all the necessary approval from V8 Supercars.

“Scotty Pye is an outstanding talent and it is extremely disappointing for us that due to other circumstances, we will not be able to accommodate him in a full-time seat for next season.”

Ambrose’s Falcon will be engineered by carryover DJR employee Mark Fenning, while Jeff Swartwout and Nick Hughes continue as team manager and technical director respectively, having been installed by Penske in the back half of this season.

A refurbishment of DJR’s workshop is taking place over the summer which, according to Penske president Tim Cindric, will lift the level of presentation to “Penske standards”.

“You can’t give them (the team) the expectation for everything to be neat, tidy and orderly and not have some way to say this is how we want it, now just keep it that way,” Cindric told Speedcafe.com during a recent visit to Australia.

“You will see some investment there within the infrastructure but it’s not going to be Triple Eight or HRT overnight.

“The focus for us is more on the people than it is on the stuff. The people then become the process.”

The staff restructure has seen an emphasis placed on manufacturing capabilities at the Queensland workshop, while Team Penske’s North Carolina, USA, facility will provide assistance largely in the area of design.

Penske’s US employees are also at work on the team’s engine program, having received a DJR V8 Supercars powerplant earlier in the year while undertaking its due diligence on the category.

Although the current DJR engines sit near the top of the category’s cumulative horsepower limit and have little room for performance development, Penske’s extensive resources will undoubtedly help refine the package.

“The way the rules are there is not a lot you can do, but it’s just a matter of how much resource you have here or there,” said Cindric of the US-based engine program.

“That’s one that we’ve had a little less resource utilised since we went to Ford (in NASCAR from 2013, which brought with it a move to engines sourced externally from Roush Yates), so it’s a matter of combining what makes sense.”

Cindric stressed that transforming DJR into “a Penske team” will take time and is not simply about adding resources.

“The uniqueness of our program is not what we are looking to buy, because any team (with money) can buy what you want,” he said.

“What makes us different is the way we go about things. Some like it and some don’t, but everything has a place and you can’t buy that mentality.

“I think it is or we wouldn’t be here, but those are the things that we will try and transition over the next two to three months.”