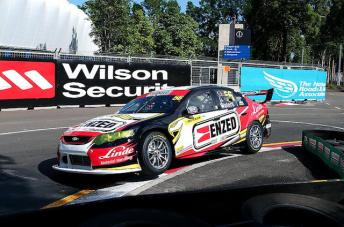 Waters took his first career round win at the final event in Sydney recently which helped him secure second in the points standings behind Eggleston driver Paul Dumbrell.

The 20-year-old, who made his debut in the category in 2011, will saddle up again in the Team ENZED PRA entry that will be prepared alongside the Ford Performance Racing main game Falcons.

PRA has also confirmed that Waters will be among the co-driver line-up for the Pepsi FPR Falcons along with the highly credentialled Steve Owen with exact combinations yet to be made public.

“We finished the year off as we started it, with genuine pace and front-running form,” Waters reflected.

“Claiming the championship runner-up spot was a fair reflection of our year, but next year we need to go one better with the Team ENZED PRA Ford and the team will be doing all they can to hit the ground running from the first race at the Clipsal 500.

“To know I have one of the prized PRA co-driver seats already locked away creates even more motivation, and I’ll be leaving nothing to chance heading into what will likely be the most critical year of my career thus far.”

PRA team boss Tim Edwards says 2014 has been a key learning year for Waters who managed to bounce back after a mid-season slump.

“Cameron has learnt a lot this year and while he claimed his first race and round win and was a commanding pole position winner, the most impressive part of his year is how he rebounded from setbacks and clawed his way back up to second after some mid-season issues,” Edwards said.

“This tenacity and performance under pressure enabled him to drive strongly in the Enduro Cup and that is why he will again be part of our line-up next season.

“We have high expectations of him and the Dunlop Series title is the absolute goal in 2015.”