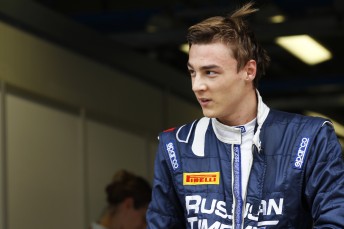 The Russian driver made his debut in the Formula 1 feeder series this year racing alongside Kiwi Mitch Evans at the Russian Time outfit.

Markelov scored just six points in his first year in the competitive category but has impressed in lower formulas, finishing second overall in the German Formula 3 Championship in 2013.

The 20-year-old is set to drive for Giles Motorsport in the five round New Zealand based championship, which will begin at Ruapuna Park on January 14-18.

European F3 Championship racer Santino Ferrucci has also secured a deal to race for Giles Motorsport with the American joining Markelov and British F3 star Sam McLeod at the team.

Reigning Italian Formula 4 champion Lance Stroll has penned a deal to join M2 Competition for the championship as the Canadian looks to aid his transition to the FIA European Formula 3 Championship next season.

“The depth of talent arriving in TRS in 2015 from from many different series makes it very difficult to pick the stand-out drivers,” said TRS Manager Barrie Thomlinson.

All drivers will compete in the new Tatuus FT-50 single-seater which will make its debut in the championship in January.