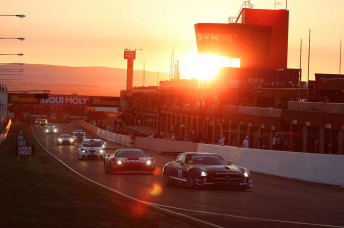 A 55 car field has been locked in for February’s Bathurst 12 Hour following the passing of the race’s entry deadline.

With no late surprises before the December 11 cut-off, the grid will boast 30 outright GT3 contenders spanning nine marques.

A further 10 GT3 Cup Porsches will compete in Class B, with three GT4 cars in Class C completing the GT component of the event.

Twelve Invitational entries make up the remainder of the field, including Ryan McLeod’s trio of MARC V8s and Bruce Henley’s pair of ex-Grand-Am RX-8s.

Plans for Radical Australia to enter two RXCs have meanwhile failed to materialise, while the recent withdrawal of the United Autosports Audi R8 and Adam Wallis Porsche leaves the grid at 55.

Cars will be fielded from 10 different countries, with local entries joined by those from New Zealand (five), Germany (three), the United Kingdom (three) and the United States (two).

The international flavour of the entry has been hailed by NSW Deputy Premier and Minister for Tourism and Major Events, Troy Grant, who says the event is a key asset for the state.

“I am delighted by the field announced for next year’s Bathurst 12 Hour, which confirms the international appeal and prestige of Australia’s longest endurance motor race and the iconic Mount Panorama circuit on which it is held.”

“The NSW Government is proud to support the Bathurst 12 Hour through our tourism and major events agency Destination NSW, as part of an outstanding calendar of motorsport events for the State in 2015, and a key event for Regional NSW.”

While many teams are yet to announce their driver line-ups, a selection of the world’s best GT drivers have already been confirmed for the event.

Although the V8 Supercars stars have been prevented from competing due to the clashing pre-season test, high-profile Australians with deals locked in are led by former Le Mans winner David Brabham and reigning race winner John Bowe, who will both drive the Flying B Bentley.

The entire February 8 race will enjoy live, free-to-air television coverage for the first time, broadcast by the Seven Network.