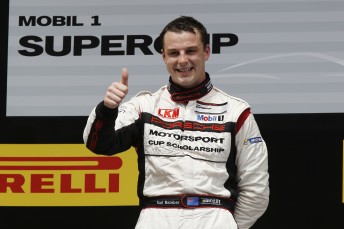 Earl Bamber has secured a coveted factory GT contract with Porsche Motorsport for next season.

The highly rated New Zealander has risen to prominence this year having won the fiercely competitive Porsche Supercup along with the Asian Carrera Cup.

Bamber’s promotion will see the 24-year-old pilot one of the Core Autosport factory Porsche 911RSRs in the United Sportscar Championship.

The Kiwi made his debut in the championship earlier this year at the Petit Le Mans, scoring a second place finish in the GTLM class with the Core Porsche outfit.

Next season he is set to partner the experienced Jorg Bergmeister, who will return to America after a stint in the FIA World Endurance Championship.

Bamber will also feature in the prestigious Daytona 24 Hours USC season opener for the German manufacturer alongside Bergmeister and Frederic Makowiecki.

The deal was announced at Porsche’s Night of Champions in Germany which also recognised the achievements of Carrera Cup Australia champion Steven Richards and Elite class winner Stephen Grove.

The Australian champions were also taken for a tour of the Porsche Musuem at the company’s headquarters in Zuffenhausen, Stuttgart, along with visiting production lines of the Porsche 911 and 918 models.

“The Porsche Night of Champions in Weissach is an incredible event. It was great to be recognised from our efforts and also to catch up with other drivers doing great things with Porsche, including Mark Webber, said Richards.

“Mark Webber came over to our table to congratulate all the winning drivers from Australia.

“The whole experience was fantastic, from visiting the Porsche Museum and 911 factory including the 918 production line to being part of the Night of Champions.

“It was also great to see Earl Bamber be announced as a Porsche factory driver after having driven with him at Rennsport last year.”

An incredible event at Porsches night of champions at Weissach. A couple of Champs standing in front of the 919. Also caught up with all the Aussies and Kiwis doing great things with Porsche including MW. Earl Bamber announced as a factory Porsche pilot.