Petter Solberg and Tom Kristensen combined to win the Nations Cup for Team Nordic on the opening night of the Race of Champions in Barbados.

The duo defeated British pair David Coulthard and Susie Wolff in the final round. 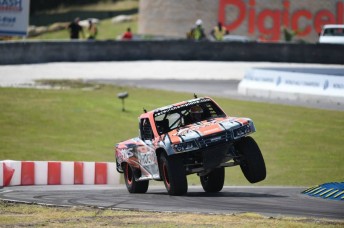 After split results in the first two heats of the final, a mistake from Coulthard in the Audi R8s allowed Kristensen to seal the win.

The Brits had earlier humbled the Team Australia challenge of Jamie Whincup and Mick Doohan in the opening round.

The Aussies scored just one win, recorded by Whincup, from their three starts against the eventual finalists.

Coulthard and Wolff went on to beat Team Barbados’ surprise packets Dane Skeete and Rhett Watson in the semi finals.

The Nordic effort’s path saw it beat the French (Esteban Ocon and Romain Grosjean) and then Team Americas (Jose Maria-Lopez and Kurt Busch) before winning the final.

Lopez provided the most spectacular night of the evening as he rolled the Stadium Super Truck, being used for the first time at ROC, while against Grosjean.

The ROC will conclude with the individual title on Sunday night, where Whincup and Doohan will start in Group A alongside Grosjean and Coulthard.