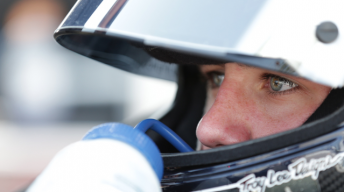 The American teenager, who already stands at over 180cm tall, will switch his attention from open-wheel racing to sports and touring cars next year.

After two years in USF2000, Cindric is set to compete in his country’s Continental Tires Sports Car Challenge, as well as continuing in Global Rallycross.

He was given a test in a Matt Stone Racing Dunlop Series car at Queensland Raceway earlier this year and, according to his father, will likely be back in 2015.

Tim Cindric confirmed to Speedcafe.com that he held discussions with teams during his visit to the Sydney NRMA 500 about a three-event Dunlop program.

“He would love to do it and I’ve had a few meetings about how we can make it happen,” Cindric told Speedcafe.com.

“When I had a look at his racing schedule next year I think the last three races of the year (would be a possibility).

“Queensland Raceway would be an obvious place for him to start because it’s a forgiving track in some ways and a track that he knows . 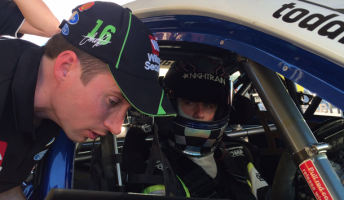 Cindric tested with MSR, under the guidance of DJR, last August

“Then Bathurst… After experiencing it, I swallowed pretty hard as a father, to think of him driving around there, but I think he could do that and then come to Sydney as well.”

Cindric is also trying to find a slot for his son in February’s Bathurst 12 Hour in order to help him learn the mountain circuit.

“I’ve had some discussions whether there is a good opportunity to run in the 12 Hour,” he continued.

“The reason for that is to better prepare for the DVS opportunity there, because after being there… it was invaluable for me to see that place first hand.

“I’ve seen the video games and I’ve seen it on TV but until you walk around and you take a ride you don’t really have a total perception of what it means to be at Bathurst.”

Cindric says that his son has no set career path planned and that a full-time drive in V8 Supercars is not being ruled out.

“He really sees there aren’t too many Americans who have been able to crack many of the motorsports here and I think he has the potential to be successful,” he said.

“He loves the whole passion of motorsport here. When Marcos (Ambrose) arrived here I guess the whole welcoming party and how he was received, he took notice of it.

“That doesn’t happen in the US.”