AF Corse Ferrari of Steve Wyatt, Davide Rigon and Michele Rugolo on the way to victory

After leading at the halfway stage the #3 AF Corse Ferrari 458 made the most of a late Safety Car caused by the Kessel Racing Ferrari, featuring MotoGP star Jorge Lorenzo and Aussie Liam Talbot, to take victory.

Having become a regular in the Italian-based AF Corse GT program, the victory is the first major GT triumph for Wyatt. 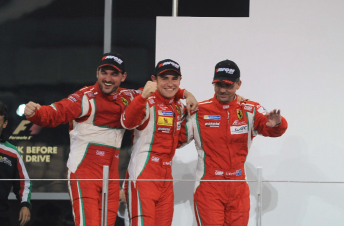 The Perth-based businessman has been a regular at the Liqui Moly Bathurst 12 Hour at Mount Panorama.

Despite leading the first six hour segment, the Black Falcon Mercedes SLS entry of Bernd Schneider, Jeroen Bleekemolen and Khaled Al Qubaisi and the McLaren 650S of Rob Bell, Kevin Estre and Alvaro Parente emerged as favourites for the win.

The pair had shared the lead for the majority of the final six hour instalment.

While AF Corse had been running strongly at the sharp end, it was only handed the lead when a spin from MotoGP double world champion Lorenzo brought out the only full course caution of the second segment.

Estre in the leading McLaren chose to pit handing the lead to the AF Corse Ferrari with Rugolo in for the final stint.

This dropped the McLaren to third behind the Black Falcon Mercedes, who had chosen Al Qubaisi for the final run to the flag. Rugolo was able to clear lapped traffic when the race restarted with half an hour to go, opening up a 10 second lead.

Al Qubaisi was unable to catch Rugolo’s despite a late charge which left AF Corse to take the chequered flag by just 3.058s.

Black Falcon finished second ahead of the factory McLaren 650s in third.