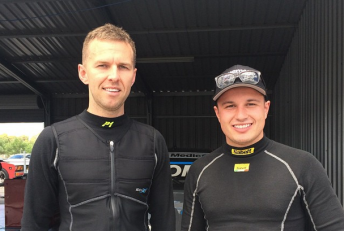 The duo took part in an evaluation test with the Albury-based team at Winton, with the former spending the day in the Team BOC Holden under the guidance of Jason Bright.

The 28-year-old Van der Drift has been based in the United Kingdom for the last four years, carving out a career in GT machinery after open-wheel opportunities in Europe dried up.

Van der Drift starred in a pair of NZ SuperTourer outings two years ago and says he thoroughly enjoyed his maiden test aboard a V8 Supercar.

“It was good to finally get in one of the cars and see how they go and react,” he told Speedcafe.com

“Compared to what I’ve been driving it obviously moves around a lot more and you can really feel the weight, but having all that power under your foot is a really nice feeling.

“I’ve always said that after my European stuff I’d love to come back and live in Aussie and do the V8 Supercar thing,” he added. Evans, 24, is currently in his third full-time NZ SuperTourer season, leading the points standings at the summer break after winning the recently completed Endurance Series alongside Shane van Gisbergen.

The elder brother of GP2 star Mitch spent the majority of the BJR test in the team’s #20 Dunlop Series car before cutting a handful of laps in Dale Wood’s championship entry towards the end of the day.

“We don’t want to get too far ahead of ourselves, but it (the Dunlop Series) is probably the next step in the path to get across there and learn the cars and tracks,” Evans told Speedcafe.com of his future.

“I’d like to end up with a full-time gig in Australia, but we’ve got to go back home and try and find the money.

“It’s hard when there’s two of us and Mitch is trying to do his thing (raise a budget for a second GP2 season) as well. New Zealand isn’t a big place unfortunately.”

Evans has benefitted from working with Van Gisbergen and Tekno engineer Geoff Slatter at the endurance events and is hopeful that his team can carry the form to a title when the series resumes next year.

“He’s in the form of his life at the moment jumping between V8s, drift cars and everything else.

“It was great to work with him and Geoff to raise that benchmark even more and trying to chase that.

“For me, I’ve only done the seven SuperTourer races this year, so I was happy with how close I was to Shane, who hasn’t had a weekend off since the middle of September.”

Van der Drift meanwhile currently has no drives locked in for 2015 but says he’s working on various GT deals, including the chance to gain miles at Mount Panorama in the Bathurst 12 Hour.

“I’m talking to a lot of people about drives but it’s all about coming up with the right deal,” he said.

“As it is with all the GT racing, you need to find the right pairing. The Pro-Am stuff can be very difficult.

“It’s all about picking the right path with the right people around you to get a result. Otherwise you’re racing around not achieving much.”

Van der Drift has forged a promising career after escaping a frightening 240km/h accident while racing in the Superleague Formula in 2010, where he suffered broken ribs, a broken right ankle, two broken fingers and a fractured shoulder blade.