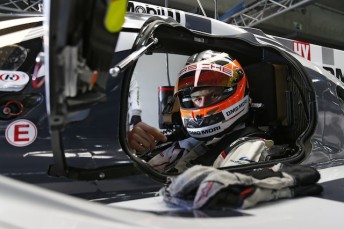 Recently announced as the driver who will spearhead a third Porsche LMP1 entry for the Le Mans 24 Hour next year, Hulkenberg joined LMP1 regulars Timo Bernhard and Kiwi Brendon Hartley at the three-day test.

Porsche were happy with Hulkenberg’s performance across the test as the Force India F1 driver quickly came to grips with the 919.

“Except for some strong winds at times, the conditions in Aragon were fine,” team principal Andreas Seidl said.

“It was important to give Nico the chance to drive the 919 this early on.

“He familiarised himself very quickly and delivered what we had expected from him, being a world-class driver.

“Also his personality fits very well into our team and with Porsche.”

Hulkenberg completed a total of 155 laps in daylight and night time running.

“There were many new experiences in a very short space of time for me and I feel a hundred percent positive,” Hulkenberg said.

“The 919 is great to drive. It has a lot of downforce in fast corners and the hybrid power to accelerate out of slow corners is impressive.

“The preparation from the simulator was very realistic and I found the night driving especially cool. I’m looking forward to further testing and, of course, to Le Mans.”