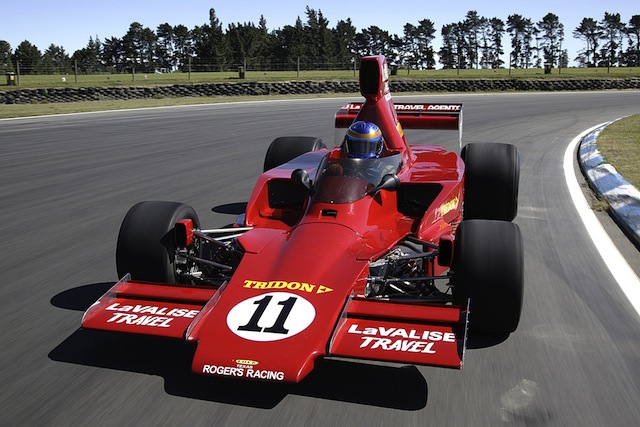 Organisers are confident close to 60 Formula 5000 cars will be lured to the 2015 Gulf Oil Howden Ganley Festival at Hampton Downs.

Held on consecutive weekends next month, the collection will see the full range of machinery that will embrace the entire era of the Formula 5000 class which ran under various iterations in the US, Europe and Australasia from 1968 to 1982.

At the end of the double weekend of action, the first Formula 5000 World Series champion will be crowned.

Evergreen Auckland legend Ken Smith is one of many drawcards in his Lola T332 which was originally owned by former IndyCar and F1 driver Danny Ongais.

Pilette, one of the stars of the F5000 era, will be one of the VIP guests at the event.

The early years of Lola will be represented by the fast Alan Dunkley in his T140.

Grant Clearwater is down to race the ex-Roy Lane hillclimbing spec M10A/B, Poul Christie is out in his regular ex Gethin M10B.

Danie Jacobs from Hamilton will have his ex Kipp Ackermann M10B on display and expat Kiwi David Mitchell from Saudi Arabia will drive his M01B in demonstration runs.

“There are potentially 65 plus cars, but we have realistic expectations for just over 60, and there is still time for more to commit,” explained Festival Chairman Jim Barclay.

“Quite simply, there is nowhere else in the world where you will be able to see such a fine collection of Formula 5000 and F1 cars running and on display.”

Added to the F5000 activity there will be up to six F1 cars and an Historic Muscle Car presence with eight cars expected to cross the Tasman from the historic Australian TransAm series.